UWA begins translocation of 20 giraffes to south bank of MFNP 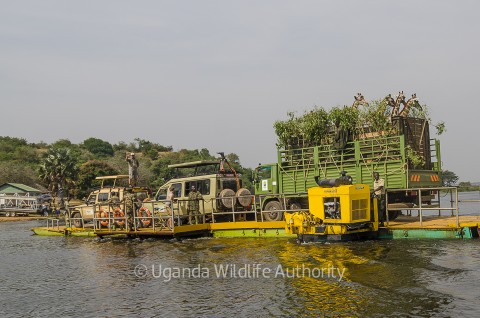 “UWA very soon will be engaging in a translocation exercise where 20 giraffes will be translocated from the northern banks in the park where oil exploration and other related activities are taking place to the southern bank where UWA consider being safer for the animals,” Nightingale Mirembe Ssenoga the acting UWA Executive Director said while receiving the equipment at its headquarters in Kampala.

She said: “As UWA we are delighted to receive the equipment it will make our work more easier.”

The equipment which includes truck worth $ 37, 5000 from GCF and cat truck from UWEC will be used by the agency to translocate about 20 giraffes from the northern Bnanks of the park to the southern bank and UWEC at Entebbe.

Ssenoga said UWA is committed to see that Giraffes like other wildlife animals are protected from any threat resulting from various Economic activities taking place in the national park. Apart from translocating the animal to safer zones, UWA is also drafting National Giraffe conservation policy which will support UWA source for more funds to support conservation for Giraffes in the country.

Handing over the truck to UWA, the Director of GCF Dr Julian Fennessy said Uganda is among the African Countries with great number of Giraffes thus asking the country to conserve the Animals because of their economic value.

“Protecting Giraffes comes with great Economic potential to a country like Uganda, GCF we are committed to support UWA towards Giraffe conservation,” he said.

James Musinguzi the Executive Director UWEC said the two donated giraffes will help the Education Centre to increase on their source of income.